In partnership with Carcanet Press, we bring you three brilliant poets. Mina Gorji’s Art of
Escape is her first collection, and deals with
escapes of all kinds, particularly as they are found in the strange and darker side of nature. Isabel Galleymore’s Significant Other looks to the cast of creatures we share our world with and brings them to us in startling bright
images. Kei Miller’s most recent collection in nearby bushes is a rich and lyrical exploration of Jamaica, its history and landscape; a territory of displaced languages, murders and stories.

Isabel Galleymore’s debut pamphlet, Dazzle Ship, was published by Worple Press in 2014. Her work has featured in magazines including Poetry, the London Review of Books and in New Poetries VII. In 2016 she was a poet-in-residence at the Tambopata Research Centre in the Amazon rainforest. In 2017 she received an Eric Gregory Award. She teaches at the University of Birmingham. 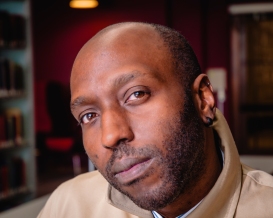 Kei Miller was born in Jamaica in 1978. His 2014 collection, The Cartographer Tries to Map a Way to Zion, won the Forward Prize for Best Collection while his 2017 Novel, Augustown, won the Bocas Prize for Caribbean Literature, the Prix Les Afriques, and the Prix Carbet de la Caraïbe et du Tout-Monde. In 2010, the Institute of Jamaica awarded him the Silver Musgrave medal for his contributions to Literature and in 2018 he was awarded the Anthony Sabga medal for Arts & Letters. Kei has taught at the Universities of Glasgow, Royal Holloway and Exeter. He is the 2019 Ida Beam Distinguished Visiting Professor to the University of Iowa and is a Fellow of the Royal Society of Literature.

Mina Gorji was born in Tehran and grew up in London. She lives in Cambridge where she is a lecturer in the English Faculty, Cambridge and a fellow of Pembroke College. Her published work includes a study of John Clare, and essays on awkwardness, mess, weeds and rudeness. Her poems have appeared, among other places, in Magma, PN Review, London Magazine, The International Literary Quarterly and New Poetries V. Her debut collection, Art of Escape, was published in January 2020 and was a Telegraph Book of the Month and a Guardian Poetry Choice.